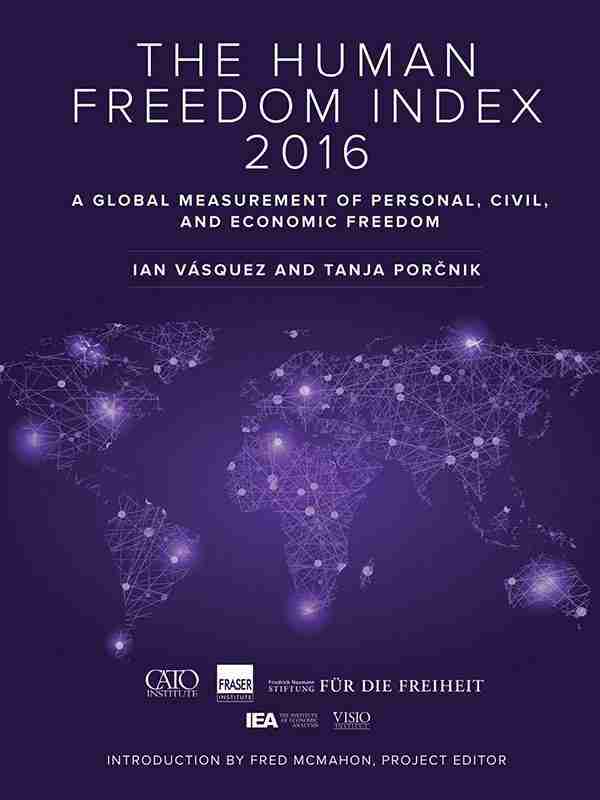 The index published here presents a broad measure of human freedom, understood as the absence of coercive constraint. It uses 79 distinct indicators of personal and economic freedom in the following areas:

The Human Freedom Index (HFI) is the most comprehensive freedom index so far created for a globally meaningful set of countries. The HFI covers 159 countries for 2014, the most recent year for which sufficient data are available. The index ranks countries beginning in 2008, the earliest year for which a robust enough index could be produced.

On a scale of 0 to 10, where 10 represents more freedom, the non-weighted average rating for 159 countries in 2014 was 6.93. The level of global freedom stayed about the same compared to 2008, but almost all countries experienced changes in their ratings, with about half of those increasing their ratings and half decreasing.

Countries in the top quartile of freedom enjoy a significantly higher per capita income ($37,147) than those in other quartiles; the per capita income in the least-free quartile is $8,700. The HFI finds a strong correlation between human freedom and democracy. Hong Kong is an outlier in this regard.

The findings in the HFI suggest that freedom plays an important role in human well-being, and they offer opportunities for further research into the complex ways in which freedom influences, and can be influenced by, political regimes, economic development, and the whole range of indicators of human well-being.