The Only Solution for the Economy of Venezuela Is Dollarization 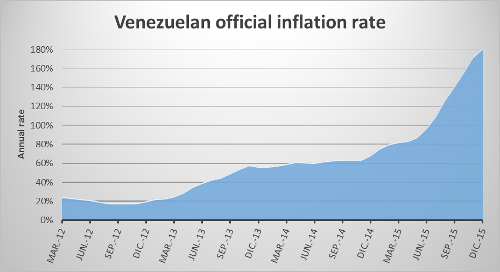 The main effects of hyperinflation are beginning to be felt. In every case in history where there has been hyperinflation, the main cause has been fiscal imbalance, and the case in Venezuela is no different.  When there is a surge in the deficit, the same applies for inflation (graph 2). 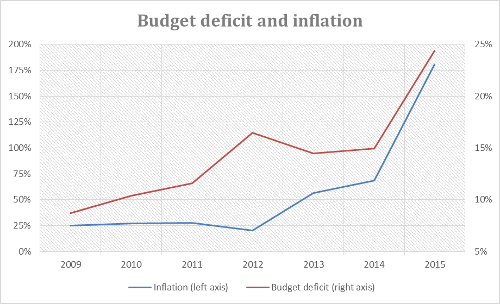 Normally, moderate inflation follows the path of the deficit with relatively large delay, because economic agents are unable to anticipate deficit values and monetization with precision. On the other hand, in times of hyperinflation, inflation anticipates the deficit (economic agents overestimate new monetization policies and there is a universal tendency to evade local currency). In Venezuela, we can see that since 2013 (graph 3) inflation has increased at a faster rate than the deficit, and for this reason we can consider the country in a state of hyperinflation as of that date. 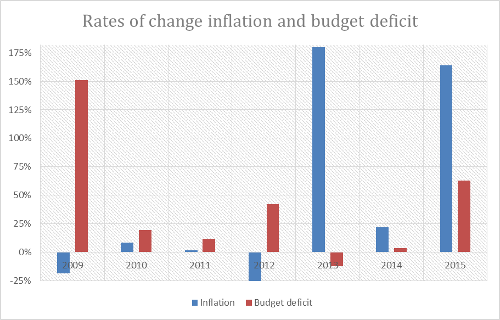 This creates a big problem for the government of Venezuela due to the fact that real tax revenues decrease (just as in all cases of hyperinflation). During the time between receipt of tax revenues and actually putting these taxes to use, inflation eats up the real value providing the government with less real revenue.

An inverse relation exists between inflation in Venezuela and crude oil prices (graph 4). This relation is such that inflation increases rapidly when the main source of government revenue (revenue from oil) decreases due to the fact that the government does very little to reduce costs when decreases in revenues are experienced (thus deficits are monetized and amounts of currency rise at aggressive rates). 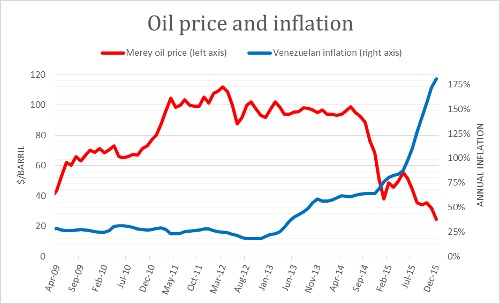 One of the most surprising and paradoxical aspects of hyperinflations is the shortage of money. When rises in prices grow out of control (which in starting to be the case in Venezuela), the amount of new money created is not enough to suffice for these increases in prices. In other words, the real money supply drops (nominal money supply / price levels). 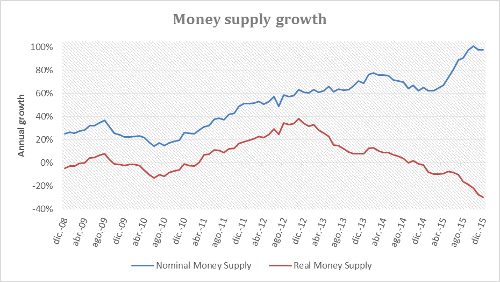 The last phase in all cases of hyperinflation is currency stabilization. This phase is inevitable whether it be because of changes introduced by the government or due to complete rejection of local currency by the population. In order for such a monetary reform to be successful, it is essential that the government first eliminate the main cause of the inflation (the budget deficit). Unfortunately, it does not seem as though the Venezuelan government has any plans to decrease spending, nor does it appear that revenue from oil will be recovering any time soon, meaning that any attempts at currency stabilization will surely fail (just as it did the last time when the bolivar fuerte was introduced in 2008).

In light of this situation, it seems that Theirs’ Law is inevitable. Thiers’ Law is the reverse of Gresham’s Law. Good money eventually takes bad money out of circulation as the latter becomes abandoned. Currently, the U.S. dollar serves as a store of value for Venezuelans, and to a lesser extent, the unit of account. The only function that the bolivar currently serves is as a medium of payments, which is only a matter of time before this function is abandoned, as well (in fact, alternatives to using local currency have begun to spring up in the form of bartering and trade). Seeing that the U.S. dollar is already serving various functions that replace the Venezuelan currency, it is all too possible that it become the undesired successor to the bolivar.

Most certainly, Venezuela finds itself in hyperinflation for which there exist only two solutions; drastically reduce spending and the deficit and execute monetary reform or lose the bolivar and adopt the dollar. Both are equally unpopular for the government of Venezuela, but the difference is that if the first option (the deficit) goes unattended, the second (dollarization) is inevitable.

One of the most anti-U.S. governments in the world will have to accept the U.S. dollar as its only remedy against hyperinflation.

We see the same thing happening in Venezuela despite enormous levels of money creation; money shortages become more and more common (graph 5). While the money supply has doubled since last year, real money supply has decreased 30%.